The NYC – All City Marching Band is made up of students from public High Schools in all five boroughs of New York City. (Manhattan, Brooklyn, Queens, Bronx, Staten Island)
We are the official marching band of the City of New York and perform in numerous parades throughout NYC including any parade by a championship winning New York sports team. Past performances have included field shows, parades, athletic events, concerts in the park, and the All-City Music Showcase at NYU.

All rehearsal are held at the Grand Street Campus located at 850 Grand Street, Brooklyn. (15 minutes from Union Square on the L train)

Auditions for the ACMB are held each year in June.

Any student interested in the marching band experience that does not play an instrument is welcome to join the COLOR GUARD!

The color guard is a corp of dedicated students that use colorful flags, costumes, and dance moves to add visual excitement and appeal to the music the band plays.

Reality Check, our student engagement and youth action component, is a student led, adult supported, statewide program for youth between the ages of 13 through 18 to address tobacco control initiatives. Students who join NYC Smoke-Free’s Reality Check program  participate and lead activities and events to help expose the tobacco industry and reduce the number of teens that initiate smoking.

Students who like math, computers ,gaming or coding, be advised: High School Forensics is coming, and you don’t have to be an expert to play.

Every fall, Cyber Security Awareness Week brings together students and industry leaders for a conference, career fair and set of six competitions in a field whose importance has never been greater.  HSF is one of the biggest competitions at CSAW.  But it’s more than that.  For students who code, it’s a door to their future. 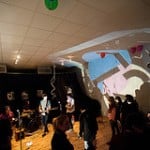 OUR VALUES
– For 22 years, Church Street School has provided process–oriented arts education to Tribeca and Lower Manhattan.
– Developed by Church Street School faculty and alumni, 7eventytwo expands Church Street School’s arts and music education program to the under–served teenagers of New York City.
-7evenytwo is a safe place for young people to meet art professionals, filmmakers and artists, and open a dialogue with them, coming together to speak about art and emerging identity.

ABOUT 7EVENTYTWO
– 7eventywo is a teen arts space for 13–18 year olds to collaborate creatively on innovative arts and music projects.
– A new paradigm in teen arts education, 7eventytwo’s members have unlimited access to monthly concerts, film screenings, rehearsal space, and workshops.
– Our workshops center on exposure and self-investigation. Through learning new processes and working with new materials, kids find ways to connect to each other and themselves.

OUR EVENTS - FREE FOR MEMBERS

OUR MEMBERSHIP MODEL
– Membership is $500 per semester and includes one 8-week workshop and unlimited access to events.
– Events $8 for non–members
– Individual –week workshops are $450

What is High 5?
Through ArtsConnection’s High 5 program, teens ages 13 to 18 buy $5 tickets to the best of New York City dance, music, theater and visual arts events year round. Tickets to museums are two for $5 every day. We also have theater, dance, symphonies, Hip-Hop, film and spoken work, so check out our Event Calendar for a complete listing of events and to purchase tickets.